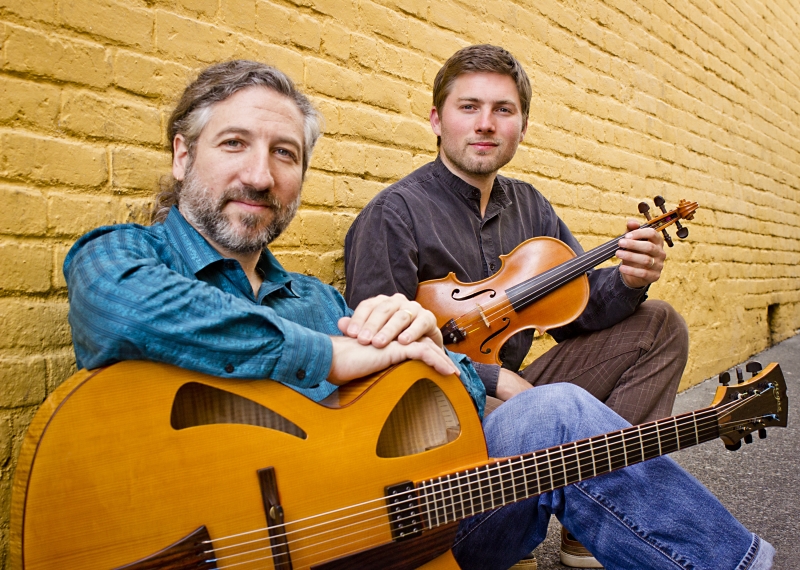 Hailing from diverse cultural and musical backgrounds, Matej and David came together in 2012 with the unified goal of reinventing the classic violin/guitar duo, updating and expanding it’s stylistic borders to include the aesthetics and rigor of contemporary art music. It is immediately apparent upon listening to them perform that the duo share a deep level of communication, building on their shared musical language to make something extraordinary.

Emmy-nominated composer, guitarist, author, and educator, David Dvorin has had his concert music performed in numerous new music and multimedia festivals around the United States and Europe. Versatile in both electronic and acoustic music mediums, he has written for and collaborated with such notable artists as Terry Riley, the California E.A.R. Unit and the Kronos Quartet.

Regarded internationally as an expert on Apple’s Logic Pro software, his textbook, Logic Pro X: Advanced Music Production, now in its fourth edition, has been adopted by educational institutions worldwide, and is the basis for Apple Computer’s certified training. David has also served as a professional consultant to music technology companies such as Native Instruments and Apple Computer.

David has been on the faculty at California State University, Chico since 2006, teaching composition, electronic music and recording arts. In addition to his teaching and artistic activities, he is also the Artistic Director for the annual New Music Symposium, which showcases the work of young composers and brings acclaimed contemporary composers and performers to the North State area of California.

Matej Seda has been playing the violin for over 25 years. He graduated with a degree in jazz violin from the Jaroslav Ježek Conservatory of Music in Prague, Czech Republic. Growing up in a family with a strong tradition of music, Matej spent all of his childhood playing music with his brothers. He has led a variety of groups in both the US and in Europe. He co-founded the jazz quintet CSQ, which played Matej’s original compositions. In addition to regular performances with a hot jazz group in San Francisco, Matej studied North Indian classical music under Ali Akbar Khan in San Rafael, CA. Currently, Matej plays violin in professional classical orchestras, tango and chanson collectives, chamber ensembles and jazz groups.