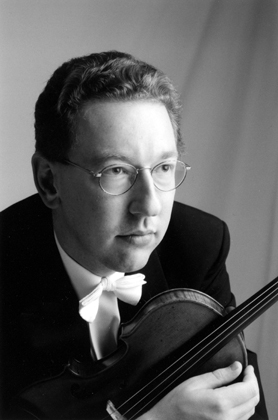 Michael Heald is currently Associate Professor of Violin at the Hugh Hodgson School of Music, University of Georgia. His performing career began in England where he was a member of the English String Orchestra for three years, recording with Nimbus. At this time he played regularly with the City of Birmingham Symphony Orchestra under Sir Simon Rattle, recording major repertoire for EMI. Other musical experiences included playing with the BBC Philharmonic Orchestra, the Royal Liverpool Philharmonic Orchestra, and the Philharmonia Orchestra, with artists such as Valery Gergiev, Mikhail Pletnev, Igor Oistrakh, Yehudi Menuhin, Gil Shaham, Pierre Boulez, Yuri Termikanov, Bryn Terfel, Walter Weller, Yuri Bashmet, Stephen Isserlis, and Nigel Kennedy. In Michigan, he was concertmaster of both the Greater Lansing Symphony Orchestra and the Jackson Symphony Orchestra, and principal second violin of the Michigan Chamber Orchestra. As a member of the American Sinfonietta for five years, Michael performed close to one hundred concerts across Europe, appearing as assistant concertmaster on one of the tours. The orchestra was also in residence each summer at the Bellingham Music Festival in Washington. He has also been a guest concertmaster for the Shreveport Symphony Orchestra.

Michael has performed many solo and chamber concerts to critical acclaim across the United States and Europe, collaborating with such artists as Ralph Votapek, Arvids Klisens, and Ian Fountain. He was a member of the Arlington String Quartet and the Beaumont Piano Trio, and as a member of Quadrivium he was in residence at the Virginia Museum of Fine Arts for a season of innovative concerts connected to the various exhibitions. He is currently a member of the Franklin String Quartet, the faculty quartet at the University of Georgia.

Some of Michael’s other performance venues have included the Bellingham Festival, the Wintergreen Festival, the Methow Festival, Vanderbilt University, Michigan State University, the University of Minnesota, the College of Charleston, the Wagner Hall in Riga, Latvia, and in England at the Elgar Birthplace Museum, and St. George’s, Brandon Hill in Bristol. Michael had the honour of performing The Lark Ascending to Her Majesty Queen Elizabeth II on one of her official visits to Hereford, England. He has appeared on BBC Radio as well as on various public radio stations in the USA.

Michael has given public master classes at such places as the Royal College of Music in London, Michigan State University, and the University of Minnesota, and has also presented at the ASTA National Conference. He has been on the faculty of the Montecito Music Festival in California, and the Wintergreen Festival in Virginia. Most recently his article “What is the Point of Balance?” was published nationally in the ASTA Journal.  In 2010 he was awarded a significant grant from the National Endowment of the Arts to present a chamber music festival of American music at the University of Georgia.

Michael studied violin in London with Emanuel Hurwitz, then at the Royal Northern College of Music with Richard Deakin. He received his masters and doctorate in violin performance at Michigan State University, studying with Walter Verdehr. As a student he performed in master classes with members of the Fitzwilliam, Vermeer, Kronos, Griller, Alban Berg and Amadeus Quartets, and with Joseph Silverstein, Maurizio Fuks, Yehudi Menuhin, Ida Haendel, Joseph Fuchs, Ruggiero Ricci, and Franco Gulli.